LinguaVox has been offering Portuguese translations for over a decade. Two international certificates and a long list of satisfied clients (both in Europe and in the Americas) attest to our exceptional quality standards. Our large pool of translators and language professionals are carefully selected and matched to the projects that better suit their specialist skills. Therefore, if you require the translation of a contract that is to be used in Sao Paulo, we will ensure that the project is assigned to a Brazilian Portuguese translator, with a solid background in employment law, and who is familiar with the particularities of the judicial system in the state of Sao Paulo. 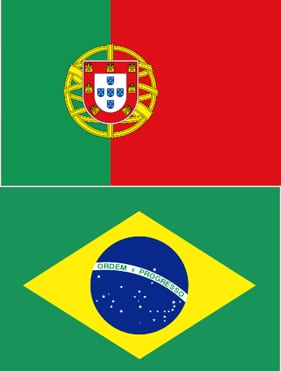 Portuguese is the official language in nine countries: Angola, Brazil, Cape Verde, East Timor, Equatorial Guinea, Guinea-Bissau, Mozambique, Portugal, and the island-nation of São Tomé and Príncipe. It is also an official language in the Special Administrative Region of Macau. Portuguese has official status in international organisations like the European Union, Mercosur, the Organisation of American States, and the African Union.

With over 270 million speakers, Portuguese is the most widely spoken language in the southern hemisphere, and the world’s fifth most spoken language. A recent study by the UNESCO declared that Portuguese is (along with Spanish) the language with most potential for international growth. In addition, the Brazilian economy is one the world’s largest (in fact, it is the second largest in the Western hemisphere) and future projections predict that it will continue to expand in the short-medium term.

With such a widespread reach, it is not surprising that there are numerous dialectal variations in Portuguese. However, there is a more crucial distinction when it comes to commissioning a Portuguese translation. European Portuguese and Brazilian Portuguese differ widely in terms of spelling, pronunciation, the use of tenses, and vocabulary. Some of the most significant variations include the use of você instead of tu to refer to the 2nd person, differences in word order, and the omission of the definite article. Also, and despite a recent orthographic agreement, there are two orthographic systems applicable to Portuguese. Some publishers and website owners even opt for translating into two different Portuguese versions: one aimed at the Brazilian population, and one targeting Portuguese speakers in Europe.

While Portuguese speakers in Brazil and Europe can generally understand each other, using a European Portuguese translation in Brazil (or vice versa) would present readers with an unnecessary foreign feel. In addition, there are important cultural and geographical references that would be missed by readers of each Portuguese variant. Therefore, at LinguaVox we ensure that our Portuguese translations are carried out by in-country translators, and where appropriate, by a team of expert localisers.

Professional Portuguese Translation Services from and into English