LinguaVox’s most valuable asset are its people. We manage a large team of translators, revisers, reviewers, software specialists, voice talents, interpreters, localisers, and linguists from our two offices, located in Europe and the United States. Our staff members are carefully selected on the basis of their specialised qualifications, their native proficiency in English, and their excellent command of one or more source languages. We also consider that professional experience is a must, and we require that all our translators have between two and five years of documented experience translating into English. Moreover, we require that our translators demonstrate that they possess a solid technical background in one or more specialist areas.

English: the official language of 54 nations, and the most widely spoken language in the world, surely does not need an introduction detailing its global importance. English is considered the lingua franca of the corporate, medical and academic worlds, and the language with the largest online presence. 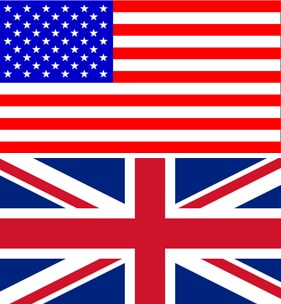 Given its widespread reach, it is not surprising that there are numerous differences in terms of pronunciation, grammar, and spelling among the English variants used in the main English-speaking countries (the United Kingdom, Ireland, the United States, Canada, Australia, and New Zealand). These differences are particularly evident in legal English. For instance, what in the UK is known as company law is called corporate law in the US, and while unfair dismissal is the term used by British solicitors, American barristers prefer the expression wrongful termination. There are many other examples of differing specialised terminology between British, American, Canadian, and other variants of English, all of which highlight the need of employing translators who can use the adequate terminology, so that the translated document reads seamlessly.

LinguaVox is a well-established English translation agency founded in 2000. Initially, our translation services focused on European languages, but over the past twelve years, we have expanded our linguistic expertise to include more than 150 languages and over 1,500 language combinations. No language pair is too far-fetched for us, especially when English is involved.

Our translation services from and into English cover all technical specialities, including legal, medical, pharmaceutical, financial, patent, website, and academic translations. Since LinguaVox was founded in 2000, we have built a large based of satisfied customers in the fields of family medicine, medical genetics, neuroscience, tax law, immigration law, banking law, intellectual property law, and in the most diverse industries, such as chemistry, thermodynamics, geology, mathematics, physics, aeronautics, and biotechnology, just to name a few.

LinguaVox also offers multimedia translations, software localisation, sworn and certified translations, and language interpreting from and into American and British English. You can request a free quote from us with the confidence that you are dealing with an ISO 9001:2008 / EN-15038 certified agency.